Getting off on the wrong foot.

So far, the year 2013 isn't being so nice to hubby and me. Hopefully this is some negativity hitting us early, so the rest of the year will open up to great things like raises and jobs and all that jazz.

1. On New Year's Eve, while displaying my Kinect Adventures jumping prowess to assembled friends, I landed wrong on my foot and sprained my ankle/bruised the 5th metatarsal. So I haven't gone running once this new year.

2. On January 1, we discovered that a car problem we thought was resolved is, in fact, not.

3. On January 2, I had to argue with my university for the rest of my loan money to cover my last semester of school. (Granted, that worked out fine, but it pissed me off really supremely, thus making it a bad day.)

4. On January 3, I finally made a dentist appointment to see what is up with this jaw pain I've been having. Turns out, I somehow have an abscessed molar and will need both a root canal and a crown in the next few weeks. Even better, my dental insurance covers less than half the cost of the procedure, meaning hubby and I will be paying some big bucks out of pocket.


Now, believe me, I do see some silver linings. For instance, I've been turning my ankle a little every time I trail run, so I'm not surprised it gave so easily. I'm grateful it didn't break while I was running.

As far as my loan money goes, it did go through, as I said. And I feel bad for being a little sharp with the student worker I was talking with, but he was very wrong in his information. Later that evening, hubby and I went to Bonefish Grill for dinner on a gift card from his boss, had an excellent meal, and left a huge tip for our nice server after talking with her about the horrible serving jobs we've had in the past. That felt good.

For my tooth...well, I have been in a lot of pain. Obviously, an abscess isn't something you want to let stay. So it's good that they found it, and it's good that it'll be removed. I'm grateful that I have insurance that's paying at least a chunk of the bill, so we don't have to pay the whole thing. I'm grateful that they have crowns and such, and they don't just have to pull out my tooth. Yikes. And the dentist said other than the mysterious abscess, I have really health teeth (I swear, that tooth isn't all bajanked and rotten. There seems to be nothing wrong with it at all, but the dentist thinks it may have been too late for the root when I got my filling 2 years ago).

But in good news, I'm making fantastic progress on my new WIP. I'm on such a downhill slide toward graduation that I'm kinda scared. And I have my best friend and life partner holding my hand through all these tribulations.

Happy new year, folks! I hope yours is getting off to a good start. :)

Look at this picture of my fat cat: 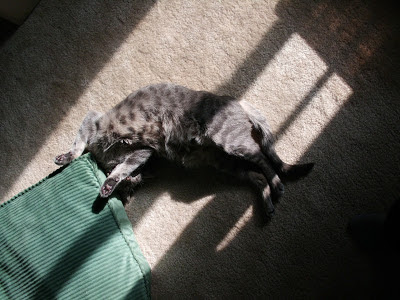 Bummer- not a great start. I hope things turn around and quick! Best wishes for this year.

So far my year has been like any other, a sprinkling of bad with more good every day. The Man got sick the other day, which was not fun to clean up. 0_o Work is work, but I have a lot of plans this year so I'm excited about those.

I know the pain of financial assistance and the pain of the root canal. My bill ended up being over $800 and that's with pretty good insurance. Sigh. It sucked. I worked bookoo overtime just so it didn't completely sap my savings.