That Reflective Time of Year

It feels like every year is going by faster and faster, doesn't it?

January 1st will mark the 2-year anniversary of this blog. Of course, things are much cooled down these days compared to when I (and many others) got going in early '10, but that's okay. Blog life has cooled down while my personal life has heated way, way up. I suppose that's the best way for things to be, right?

Those are all very do-able, and most are necessary. A few years running now I've managed to achieve all my goals, so I'd like to keep it up!

Whatever your wishes/resolutions/goals are for the new year, I hope you find much success and happiness while you're having at it.

I hope you are all experiencing the magic of this time of year.

The weather outside is far from frightful, unless you count the huge temperature snaps we're having. One day the high is 48, and the next it's 72. Last year we had a white Christmas (one of only a handful I can recall); this Christmas it's supposed to be 52 degrees and sunny.

I've been taking full advantage of the break from school. We had some electrical and plumbing work done around the house that's been sorely needed since we moved in. I've cleaned and organized the place within an inch of its life.

I finally finished The Tudors, which I started last Christmas. I've crocheted a bunch of stuff.

I started rewriting/revising one of my novels from last year, the one that's always whispering in the back of my head.

I went to a fun Christmas party last Saturday and saw friends from college whom I haven't seen in 5 years.

Hubby and I saw the new Sherlock Holmes movie last night and thoroughly enjoyed it. Equally important and exciting were the trailers for The Dark Knight Rises and John Carter. I read the John Carter of Mars series when I was a kid and have been excited for this movie since I heard about it--and even better, it actually looks pretty good!

I'm trying hard not to count how few days I have remaining of break and instead just enjoy the crap out of what I do have. That's the secret to life, I guess: enjoy the crap outta stuff while you still have it.

Well, I'm finished with my first semester of nursing school. I actually finished on Tuesday, but I've been far too busy enjoying said break for anything longer than a tweet and Facebook update.

I made all A's this semester, which I'm very happy about (of course). Next semester I'll be taking the second half of nursing fundamentals, A&P 2, and pharmacology. So, you know--it's going to suck.

I'm finished with my Christmas shopping, though I'm still assembling some of the pieces. I've made some new crochet items this year--a big step up from last year's scarves and hats. And yes, the kitties are going nuts over the Christmas tree.

I've got the itch to work on my WIP. I'm not making myself hold to any defined goal, but I'd love to see it get into the third act, at least. I'm thinking 2012 might be my year to kick it into gear, you know?

Tonight is my husband's work Christmas party. He works for a big company, and he's been hearing stories about their Christmas parties since he started working there. They give away prizes; this year includes a Kindle Fire(s?) and HDTV's, among other things. We're super unlucky (minus the $147 we found on the ground a month ago--very out of character), but I'm really crossing my fingers for a Kindle Fire!

I've never been to a nice office Christmas party before. This one is cocktail attire! Crazy! So I have my new dress, new hooker boots, and all day to think about how I'll do my hair (tonight will be my first night meeting most of his coworkers). I'm sure it'll be fun... I just hope it doesn't end up like this:

(warning: spoilers for Mad Men and also not for the faint of stomach...)

The End is the Beginning is the End

Are you getting tired of reading a laundry list of my tasks yet? I know I'm tired of writing them. Fortunately for both of us, only two remain: finals!

Yes, my first semester of nursing school is almost over. Next Monday and Tuesday, then I'm free! Free! <---can you tell I'm excited?

It snowed on Tuesday. That's right--snow in Georgia in November. If it snows at all here, it's not until at least January--sometimes late December. We're having the wackiest fall weather I've seen in a while, though. One day it's 39 degrees, the next it's 60. Gotta love the South...

Technically speaking, I did not "win" NaNoWriMo. Too many tests, papers, and too much studying got in the way. But I did write 32,000 words, and I did make A's on every single test this semester, so I call that a win. But if you add together what I managed to write during the semester with the NaNo wordcount, I'm just over 50k. The novel itself is shaping up well. My brain is in that hyperactive state where stuff gets dangerous--trying to come up with too many ideas, fit in too many interesting elements, that ends up making my manuscript a hot mess and leaving me crying in the corner when I think about revisions.

I put up the Christmas tree (it's artificial--first time in a while). The cats immediately climbed it. And believe me, if you've never seen a naughty cat jump from the top of a 7.5-ft tree after getting sprayed with a water bottle, it's a sight to behold. Last night I put on some ornaments, and this morning there are about 8 on the floor.

Why do all the television shows I watch have to go on mid-season break right as I'm about to get free time?

I'm excited about having some time to read. I only managed about 4 books this semester and 5 audiobooks (I drive 3+ hours a week to class). The last book I finished was the latest installation in Karen Chance's Cassandra Palmer series, Hunt the Moon. If you like urban fantasy and haven't read these books, do yourself a favor. She's pretty much my author-idol on every level: characters, plot, action writing. And now I'm reading Tangled Tides by our very own Karen Hooper!

My great plans for Christmas break?

1. Write. I'm not going to say finish my novel, but I'm going to do some damage.

2. Crochet. I've been finding pictures of projects on Pinterest like a fiend. First up are going to be an infinity scarf and a coffee cup cozy.

3. Finally finish The Tudors. I watched the first 3 seasons last Christmas while I was crocheting and wrapping presents, and I've had the fourth season for about six months, unwatched. Good times will be had.

I hope all you Americans had a lovely Thanksgiving holiday! I had my first deep-fried turkey, and it was pretty good! 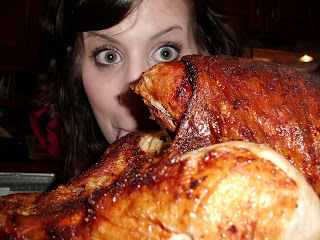 Now I'll go off into my study cave, where I'll try to remember an entire semester's worth of nursing textbook (40+ chapters!) and learn everything about the nervous system.

Happy December!
Posted by Summer Frey at 8:00 AM 11 comments