Last Friday, the nursing department had orientation to senior year. One of the featured speakers--and this is a big hint about what life as a nursing student is like--was the director of student counseling services. Yes, they sent a shrink to talk to us. Mostly about anxiety and stress, which ironically all of us were already feeling by that point in orientation. When they start the day out with a lecture with the core message of "tell all your friends and family goodbye until next May," it tends to give one the nervous sweats, you know?

In addition to my half-marathon training, I'm thinking about starting up a nursing students' Fight Club. You know, for stress relief.

Here are a few messages from the afore-mentioned shrink that I thought I'd write down:

"What you think about most happens." (basically, The Secret in one sentence)
--the counselor's addendum: look toward where you want to go; if you're staring down failure, you'll run right into it.

"Don't look at the big picture: concentrate on what's right in front of you." (This especially is vital for me. If I try to think about my semester on the whole, I go fetal.)

and finally: "A test is not a measure of your value as a person."

All nursing students are chronic over-achievers, myself king of them. That remark resonated with me, for reasons I don't need to explain. Whether or not I'll stick to it remains to be seen.

it's been a while.

What I do know is that there's an urge inside me, struggling to express itself. Right now it seems to be saying buy more books, which is probably not a bad idea or a good one, if my husband has anything to say about it. It's the same voice that's currently discontent with my house, my things, my yard.

Actually, I think I know this voice. It's the same voice that used to talk to me right before school started every fall--whispers about things unknown, sights still unseen, experiences looming on the horizon that may be good or may be terrible but will definitely change me even if I don't realize it until eight years later.

Only this time I'm on the downhill slope to 30, and I'm happy with my life, even though I'm tired of being in school. Irritated at my past self for not making the right decisions about a career when I was still young and not so damn tired.

I think it's the hangover. Or the rain.

My novel is pretty much scrubbed shiny. It's in the hands of final beta readers right now, and I'm doing a final read-through, picking over punctuation and tiny words just because.

Matt MacNish critiqued my query on his blog last week.  That was good, and helpful. I haven't touched it since then, due to the afore-mentioned nitpicking of my MS.

My list of agents to query is getting in good shape.

I wanted to start querying as I started back to school, so I won't have time or brain space to be obsessive and think about it all that much.

Still need to write a synopsis. Haven't even started that yet.

And I have 300 pages of material to read before classes start on August 22. I've read about 50 so far. 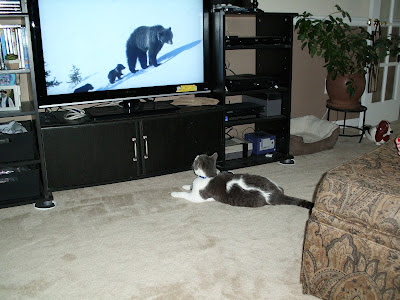 That's my cat Monty watching Planet Earth with us. He was engrossed the entire episode.