A Year Goes By

Today is the official one-year anniversary of two special arrivals in my life: 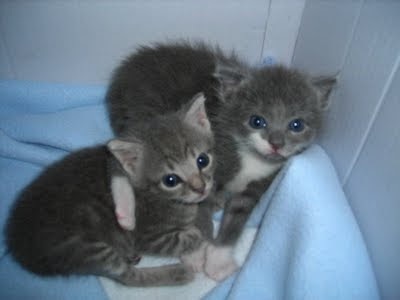 Those early days were stressful. Since they were less than a month old, I still had to bottle feed and stimulate them. Mack was terribly difficult to feed with the bottle--I'd have to stretch him out on his little back feet until he was standing all the way up before he'd latch on. But they were so, so darling.

And look at them now. So big they don't even fit in one picture together anymore: 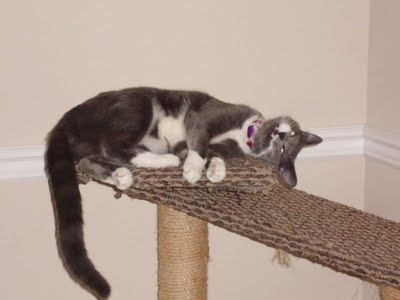 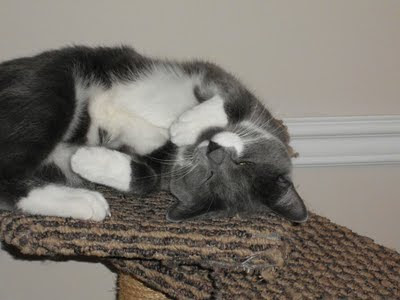 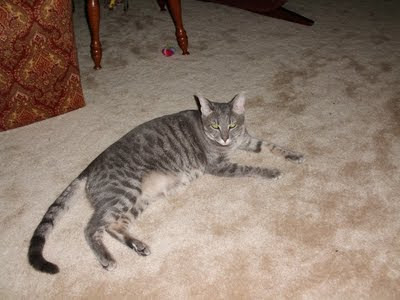 And now, of course, they have another friend: Is there such thing as too much animal love? Of course not.

Now I'm just counting the days until the felines get a canine companion... :)
Posted by Summer Frey at 11:04 AM

they were so cute back then and they're STILL cute today!
And yay! I can't wait for you to get a dog too!
OT - expect something in the mail from me ;)

They look mischievous, but cute. I need a tree, but I am afraid after I get one mine won't use it.

Kitties! Oh my, I love cats. My little bundle of joy has gotten so fat I'm gonna have to put him on a kitty diet here pretty soon!

Awww. So sweet! I can't wait until you get a dog, too -- I'm looking forward to puppy pics already. :)

Bountiful cute overload. No, there is no such thing as too many to love. I have 4 inside cats and a working dog for the deaf. I wouldn't trade any one of them. (Hugs)Indigo

I remember when you acquired those kittens. So much for it being temporary, huh?

Holy cow--they got big. I remember when you got those kitties. So cute.

Oh my gosh, so adorable! I really love cats! My parents cats (who I grew up with) are getting soooo old now. The one is 17 years old and the other is about 16 (we aren't completely sure as we found her as a stray but that's our guess). Ahhh I love animals they are sooo cute!

They've grown so much! They're adorable :)

How cute. They don't seem to stay little for very long.

Oh the new guy is cuddly. :) Do the two boys get along?

Man, I forgot how tiny they were! Awww. They get big so fast.

Oh, & we spent the weekend caring for my FIL.I'll tell you later. (and the construction guys weren't done until late Friday evening. *sigh* But it's done.)

Aww! Very cute, Summer. Great photos; especially that last one. We have one cat. He is sitting behind me as I write this, sitting high above the ground on his perch, staring at the finches in the back yard, wishing he could get out and get after them...

They're adorable! I have three like those myself... And I'm deeply in love with them. I'd love to have a puppy too, but I live in a tiny apartment...
- EEV

SO CUTE!! That first picture is stinkin adorable.

Aw, they are beautiful! I love your big kitty men. I've got just one cat right now and two dogs. I love them so so much. So grateful I get to have them in my life!

OMIGOODNESS!!! I've been away FAR TOO LONG! What a perfect day to hop on in. They're so cute! They've gotten so big! I'm sure they're rascals as usual!!!

PS - I love that you listen to movie soundtracks... that's genius! I'm writing that down :)

You make me very sad I am allergic to cats. I wish I could get one!

Hi! I like your blog! It has useful information.

I am following your blog. I ask kindly that you visit and follow my blog as well.