I know it's in part due to the stress of trying to buy a house and watching each one slip through our fingers for one reason or another. I'm actually feeling better in that regard--I do know that, logically speaking, I'll get a house eventually.

Some is the nasty arrival of Spring allergies, and my forgetfulness about taking Claritin in the mornings, not after I've been running around outside all day and have a major headache.

A large part is a case of wicked nightmares and all-around odd dreams I've been plagued with lately. Serial killers in some, exes in others. Last night, I had a very realistic dream in which Santa Claus proved, irrefutably, that he existed. And as magical as that sounds, it was underscored with a hint of unease, discomfort--even fear.

To combat this lurking ennui, I've been pushing myself physically--running more and more each time, and now I've started up the Jillian Michaels 30 Day Shred workouts again. Yesterday while stretching post-run, I discovered that I'd burst some blood vessels in my calf.

Most of all, my writing has been suffering. I'm generally pretty good about pushing through blocks, just getting words down (thank you, English degree and papers whose deadlines don't care), but this time it's tougher. I'm so close to seeing the end, but so frustrated with the sound of my own Voice that I can't stand to see the sentences that I write. I keep telling myself it's just the rough draft, get it down, it can suck--all the usual mantras, but they aren't helping.

Fortunately, it's all still manageable. I think it's just "that time of year." Things are so close to changing, but you've gotta slog through the shit first, you know?


*** an attempt to end on a lighter note ***
Since I sorta broke my digital camera a while ago, we only had a disposable camera for our trip to Maryland a few weeks ago, and when we got them processed had a CD made too. Here are a few pictures of Calvert Cliffs State Park, where the beach is eroding and you can find fossils! 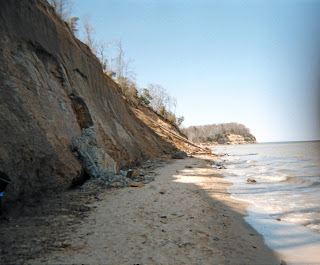 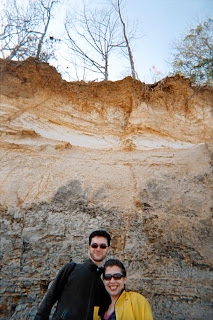 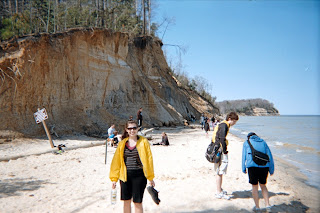 It was a 2 mile hike through woods and swamp to get there, but totally worth it! However, it was only around 55 degrees and super windy, so that wasn't as fun as it could have been. I did get in the water just for a second, and couldn't feel my feet for a while afterward...
Posted by Summer Frey at 8:00 AM

I hear you on the "off"ness, as we discussed last night. I really can't tell you what will get it back. Time and donuts. Supernatural and whiskey with a beer back. I watched a little Supernatural last night and I felt better. That's probably why I started writing again, that and watching a few hours of TNG this last Sunday. The Muse is waking up.

Oh your nightmares mean you are pretty anxious and unsettled and worried!! Oh dear!!! You have so much going on at the moment! I do remember housebuying with my ex and it was quite a trying period and quite stressful!! Good luck with your house hunting! I hope the stresses ease a little!! I hope your writing goes well too once the stresses are removed!

Yay for these fab pics of your hols! Take care
x

I agree with Kitty...I think the nightmares and ennui stem from the state of limbo you feel like you're in.

Maybe put your bottle of Claritin on the counter next to where you make your morning tea or where you store your mugs?

i always sink into wierd moods whenever we have big season cahnges (like fall to winter, or winter to spring). I think it has something to do with my body adjusting slower than my mind and junk.

Did you find any fossils??! Because that would be frickin sweet!

I've been off too. I hope it is Spring's arrival...but I'm afraid it's other bigger life changes. Good luck working through it. Enjoyed the pictures.

I hope things turn around for you soon, that sounds frustrating.

Hope you get some peaceful rest soon! Photos are cool.

I hope that you feel better soon- I wonder if the weather there has been as cold for spring as here? That has not been helping me at all lately. We're supposed to swing from one extreme to the other by more than 40 degrees later this week. Oh, the sinuses...

Thinking of you and hoping that funky feeling lifts soon.

Weird, I've been remembering my dreams lately, something I almost never do. And they're really out there!

I've been off since about December. I hope we both get 'on' again asap! Buying a house (HUNTING for a house) is terribly stressful. Plus, you've got school coming up...it's no wonder you're off a bit.

Wouldn't it be nice to be able to go to a magical spa where we get all sorted out, and come home and everything else is sorted out?

Sad about the beach erosion, but cool about the fossils :)

What wonderful crumbly cliffs. What sort of fossils did you find?