Last night, with husband, brother, and brother's girlfriend, I went to see Billy Collins, just like I said I would! And you thought I'd back out...

I'm so glad I went. My favorite thing about Collins is how he can be humorous and profound in the same line of poetry. Not a single word out of place. And the things he writes about...

He read some old stuff, read a poem from his "forthcoming" (the introductory speaker, Thomas Lux, who is also a wonderful poet, said that he thinks "forthcoming" is every author's favorite word) collection entitled Horoscopes for the Dead, and read some haiku, which might have been my favorite part.

At one point he thread three poems about dogs. One of them was my favorite poem of the night, entitled "The Revenant." As introduction to this poem, Collins talked about how when writing about dogs or pets that we care about, it's often very difficult to avoid sentimentality. So he wrote "The Revenant" in a direct tack against sentimentality, and it is wonderful. The speaker is a dog's ghost, and the first line is "I never liked you."
He said that he has always advised poetry students who are having a difficult time with a line or a stanza to bring a dog into the room, and they will find their way out of the difficulty.

Another funny poem towards the beginning was called "Oh My God." Collins introduced it as a poem about a speech tic that has infected our language; however, as he was contemplating this phrase, he came to realize that while he'd always thought that only verbs have past tense, he realized that this phrase does too, and it's "I was like, 'oh my god.'" Funny stuff, folks.

So. A very enjoyable evening. Even my husband liked it, and he's not into poetry at all. If you ever get the chance to see Billy Collins, go go GO! You won't regret it. 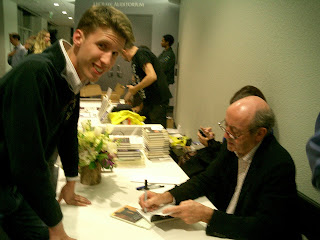 My brother getting his book signed by the man himself. 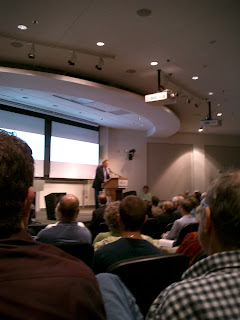 Hard to see, but that's Tom Lux giving the intro. 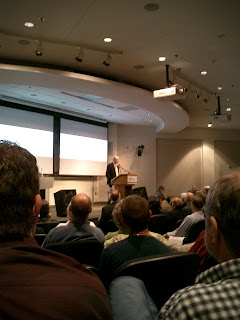 Also hard to see, but that's Billy Collins after he first went up.
Posted by Summer Frey at 8:54 AM

It sounds like you had a good time. You know my experience with poetry readings though so I'm skeptical. Very skeptical.

oooh, i'll have to look up the dog poem/s. Since they are full of win, in my book

Hah! That was awesome!

Looks like a blast! I'll have to check him out.

Oh wow!!!! What a fantastic night!!! I'm so envious!! :-) I must read up on some of Mr Collins' poetry! Thanks for the introduction and yay that you all had a great time! Take care
x

Now THAT sounds like a fun night. Glad you enjoyed it. :)

Hearing that one's dead dog didn't really like you is funny!

How fun! I'll have to add Billy Collins to my list of names to read.
Making Life a Work of Art!

How awesome Summer!!! I love when people takes pictures... I'm able to sort of live through them :) Makes it all the more fun!

So sorry I've been distant from your blog! At work where I normally blog it doesn't like your blog... or Christines! It drives me bonkers!!!

Sounds like you had an awesome time! I'd love to go to a poetry reading, even if I didn't know the poet. It looks like it would be so much fun.

I'm so glad you all enjoyed yourselves. The poet sounds like a hoot!

Wow! Sounds like fun. I left you an award on my blog. Go there to pick it up.