I'm sure most, if not all, of you follow the wonderfully delightful DL Hammons at Cruising Altitude. If not, go! Go! DL is kind, thoughtful, amusing, and an all-around great guy (and he's not paying me to say this, though if he'd like to, I have a PayPal account. Just sayin'.)

I also consider him to be one of my friends, so I wanted to promote his awesome blogfest, coming this weekend. It's not just any ordinary blogfest--he's also turning it into a giveaway!

Go here to check out the official details. 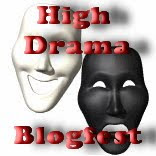 So what exactly is "high drama"? I'll let him tell you in his own words:

So, what am I after with this Blogfest? Drama. The word is Greek meaning "action", which is derived from "to do". Though its more common usage speaks to a specific mode of fiction represented in performances, it has also come to refer to a specific genre of fiction (neither comedy nor tragedy) involving a serious mood and conflict. That’s all just literary speak meaning drama simply covers a wide spectrum of contention, action crisis and atmosphere designed to amp up the stakes in our stories. It is an element of writing that transcends genre, so everybody can contribute. I’m looking for a sample of your work that demonstrates those qualities.


I've already been thinking about what I'm going to use, but I haven't decided on anything yet. The word limit is 500, and I'm a chatty Cathy, so this might be difficult...


What are you waiting for?? Go sign up! August 7th is right around the corner...
Posted by Summer Frey at 7:00 AM

I'm signed up and currently searching through the depths of my brain for the perfect piece. I'm thinking horror!

Summer....you southern peach!!! This post is amazing and I can't thank you enough!(what was that account # again)

I've been struggling with the 500 word limit myself. I set that restriction because I wanted to keep the entries to a manageable length so everybody could make the rounds without feeling as if they just read War & Peace. You know how I am about rules though, and I'm not above bending my own. So if you need to stretch your word count by a couple hundred...go right ahead! I'll post this same notice on my reminder this morning.

Good luck to all you fab Drama Divas joining in! Sounds pretty intense and is sure to be amazing!!

I should see you there!

DL's terrific. I'll see what I can come up with :)

But, yeah, you are a yummy southern peach. Totes better than cake. :) And a right proper pimp, too.

I'm getting into the idea of blogfests--and this one sounds pretty good...we'll see! I love DL's site. Haven't been there today, so you reminded me!

This sounds awesome. I'll have to check it out even if I can't find a piece to enter.

Sounds like a lot of fun. I only wish I hadn't been away from the blog world for long periods of time; I totally missed this and don't have time to put anything together. :(

By the way, your last post about the Sweet Valley Twins is hilarious. Oh my word. Wow. Was the writing always that bad? I must have been too young to notice.

Thanks for the link! I'm going to sign up... it sounds fun. Although I think it'll be hard to keep the drama to 500 words; that's so little space to get all dramatic (and I have some skizzles for being a drama queen, as anyone who knew me in college can attest).

I'm all signed up! Looking forward to reading your entry :D