We Survived (many photos)

Not that I was worried or anything.

In case you missed it, Evan and I drove up to Nashville, TN last Friday to visit his brother, who is teaching a summer film course with one of his old Vanderbilt buddies. We stayed with the Vandy buddy and his wife in their beautiful 1930's-era home in one of the city's historic districts.

The drive up would have been fine--we drove straight up through the 2 counties between us and the state line, dashed across a smidgen of North Carolina, then drove across south-eastern Tennessee to Chattanooga. We hit Chattanooga right at rush hour Friday evening, which of course we neglected to realize, as we forgot we were changing time zones. D'oh. We sat in Chattanooga rush hour for almost an hour, which put us arriving in Nashville at 8pm, CST.

Trip was short, but fun! It was my first time in Nashville, so Evan and I did a driving tour, including the downtown area and the Parthenon recreation. After that, we all mostly sat around and played video games--specifically, Left 4 Dead II (zombie game).

The best part of the trip (for me) was a visit to McKay's, a used book and movie/video game outlet. I know that buying used books can be frowned upon in the publishing/aspiring-to-publishing world, but sue me--we're poor and not getting rich any time soon. The place was amazing--tons of books (and movies and video games), many of which were fairly new releases. I could have stayed there for hours, but I was pushing everyone's patience at 40 minutes. I did manage to snag 8 books, which I'll picture later (and a DVD all for $17).

Didn't get as much writing done as I'd hoped, but I did get an entire new plot idea that I'm very excited about. Surprisingly, it was another women's Southern fiction. So I'm looking forward to finishing Saving Me and getting it querying so I can start on my SNI!

Hope everyone had a wonderful weekend! 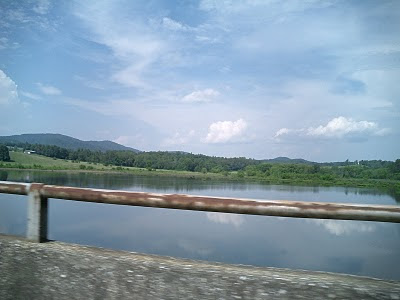 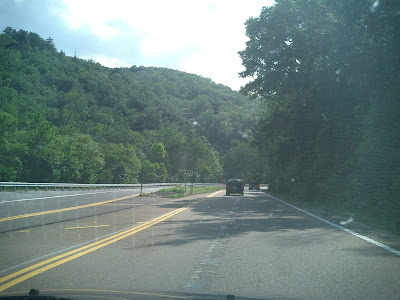 This is what highways look like in the mountains. 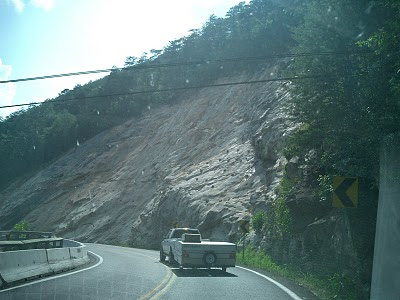 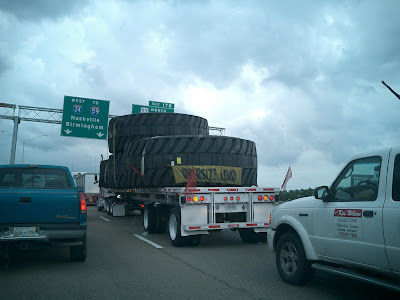 One of the interesting things we saw while stuck in Chattanooga traffic. Any guesses what those ginormous tires are for? 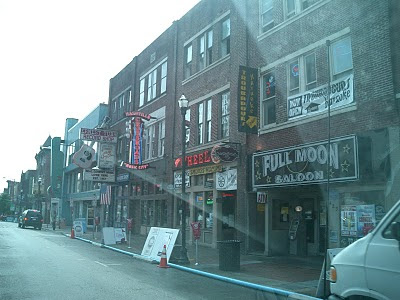 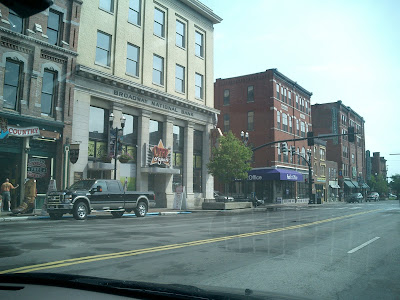 More Western stores than you can shake a stick at! 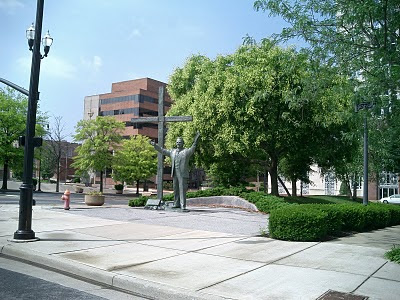 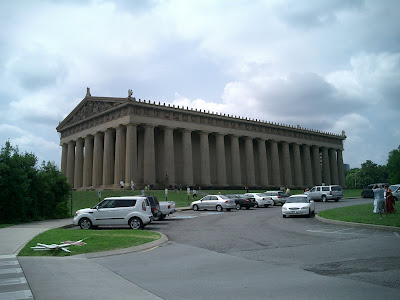 The Parthenon recreation. Pretty neat from a distance... 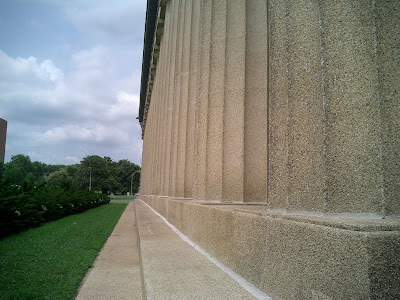 And then up close you realize they made it out of the same conglomerate they make libraries out of. I mean, really? Couldn't have done something more special for the Parthenon?? 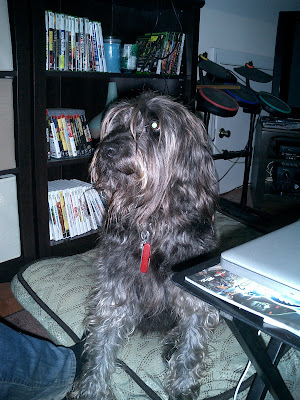 This is MacGyver, the awesomest dog ever! 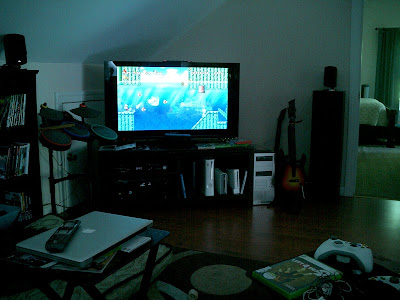 This is where we spent most of our time... 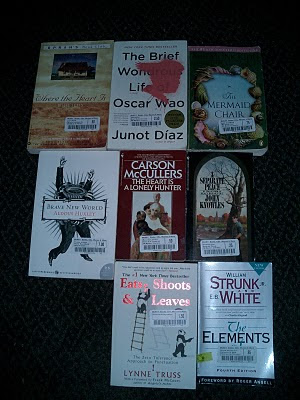 My book bounty! I've read some before, but don't own. 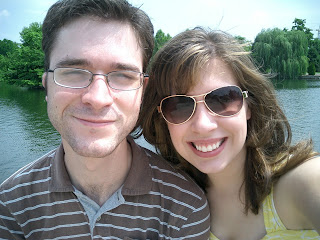 1. I like the scenery in Tennessee, especially in the mountains. It's awfully nice, even though sometimes it makes me wish as though I'd never seen Deliverance.

2. It's about time you got The Elements of Style. Sheesh! ;)

Glad you had a great trip. I've never been to Tennessee. Looks interesting. Can't wait to hear about your new idea.
Great book finds.

Great pictures! Sounds like you had a wonderful time.

I only visited Memphis, did not get a chance to visit Nashville yet. Looks beautiful though!

Thanks for sharing your pics!

I love the photo tour...perfect for a Monday morning! Welcome back and thanks for sharing!

Tennessee can be very beautiful, especially in the mountains. I actually went to boarding school in Chattanooga for a year and I remember Lookout and Signal Mountain well - though the city must have grown a lot if there is traffic now - it was tiny when I was there.

Glad you had fun. Nothing passes the time like blasting zombies with your friends (or family).

Yes, Tennessee is beautiful, but even more so is that interstate sign with the big tires NASHVILLE/BIRMINGHAM. Its the latter that I think is so gorgeous...you weren't far at all from my lovely town of Tuscaloosa!! ;o)

The last pic is my fave - looks like you had a blast!

Last week I should have been in NASHVILLE,had our flight and hotel booked for the week as we were going to see a PBS TELVSION show being recorded at the Gran Ole Oprey, but of course it got flooded in April so it was cancelled, hopefully it should go ahead in Feb next year, I was bitterly disappointed but your photo's made up for some of it, They were great. Thanks for sharing
as I will know what to expect when I go.

ah, you and your hubby are a positively adorable couple, your kids will look like they were made from marshmallows and sugar :)

I agree with Dezmond...you to are adorable! :)

I'm not getting any writing (or reading) done in Maine...mad amounts of EATING, shopping, beaching, antiquing and more eating is mostly what is happening w/ me.

Love the pictures...glad you're home safely.

We're off to the LL Bean store..

Glad you had a good time.

Were the tyres for planes? Jet fighters? :-)

What amazing pics - all highways and huge roads and Nashville! - Fantastic!!!

Good luck with your querying and am very excited for you that you've got a new story all lined up and ready to be written!! That's so great!!!!!

Looking forward to hearing what your new plot idea is about too :D

Great photos - looks like a good trip! I've driven from Canada to Texas and it was brilliant watching the scenery change through our car window.

My husband and nephew play that game...I'm not a gamer so much. A used book store squatter I could be. That's a great deal! Looks like you had a great time!

I've been to Nashville a couple times and its a great city! Thanks for the taking us along on vacation with you. :)