This is the name of a feature that I'm really dying to have, as I've made several mentions of the special extreme Northeast Georgian culture. Unfortunately, this also requires me getting out and mingling with the locals, which is something I haven't really done, other than going to the grocery store and a few antique shops.

However, I did hear two turns of phrase that I found amusing and hope to someday incorporate into a story:

I know there are idiomatic expressions everywhere, but I found these 2 particularly hilarious.


Thanks for all the well-wishes about my wrist--I think they worked. That, or the ibuprofens and diligent ice-packing I did over the weekend. I canceled my emergency appointment with my surgeon this morning, I'm feeling so much better. Just back to the regular amount of pain. Yay!

So, this morning I woke up, got ready, stepped outside and...SNOW! Yes, it's snowing again in Georgia. In late March. Spring has officially sprung! We've had 70-degree weather, thunderstorms, and snow all in the same week. Ain't it great?

I got a Sexy New Idea a few nights ago and have been working on it...please don't flagellate me for being so ADD, but I'm really excited about it. I'm also holding off on jumping in and will be TRYING to do the Snowflake Method, as Nicole's rave reviews of it for her gave me some hope. I've been world-building for two days and will continue to do so after this post.

One of my favorite Bloglodytes, the lovely Jen, is having a 300 followers AND 24th birthday contest! Twenty-four is the best age to be, I'm hoping, as it'll be my turn in a few weeks. There are awesome prizes and sexy pictures--what not to like? So check it out!

Another of my favorite Bloglodytes, Sarah, is having a 100 Followers contest, and this one requires THINKING! Gasp! Horrors! Go, Go, get 'em, get 'em!

'Kay, I think that's all the pimping I have to do for now.

As you know, I'm not really one to share sage writing advice--I leave that for people who enjoy making metaphors. But last night I engaged in an activity with my husband (NOT THAT ONE) that made us giggle, hurt us a little, and resulted in something awesome. 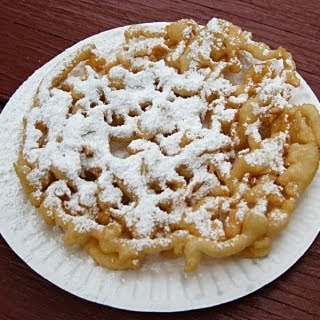 And so I discovered that making funnel cake is kinda like writing. You have to really get heated up, pour out everything you have, let it sit for a while, shake it up some, let it sit some more, then voila! Sprinkle some powdered sugar on top and BAM! Delicious novel. I mean, funnel cake. But along the way you can get oil burns, big sloppy funnel cake/writing FAILS, and possibly ants. Metaphor those as you will.

I'm pretty sure more queries would get accepted if you sprinkled powdered sugar on them. Just sayin'.


PS: I ate about 3 bites of my cake, then left the rest to Evan, who scarfed 2 and a half before he announced that he was dying and gave up the last bit of the MONDO FUNNEL CAKE (which he made by pouring ALL the remaining batter into the oil.)


Have you had any epiphanies lately? And, more importantly, do you like funnel cake?
Posted by Summer Frey at 2:54 PM

I've tried the Snowflake Method. Actually, I've tried a lot of methods...lol. No one method has ever worked for me. My system of creating is pieced together from each one I've tried. At least, that's what I think.

Thanks for pimping me out Summer!!! Love the phrasing! Awesome on the wrist, having a little pain than a lot, I guess you have to have some bonus!

Love sexy new WIP's!!! Nothing to get you in the spirit!!

Oh I'm so jealous, what time should I be over for the funnel cake!!! I have to wait until October to pick mine up at the Houston Renassiance Festival!!!

I've always heard them called elephant ears, but I like them.

Snow? That is crazy.

I guess you're not anywhere near me as I'm in NC. And I guess w're getting your snow turned into freezing rain.

Funnel cakes back home are called dough-boys but they're sprinkled with real sugar instead of powdered.

My brothers and I used to say "Gag a maggot" when we were kids, a long long long time ago.

Good luck with the snowflake method and that funnel cake looks wicked awesome. :)

Anne, I'm only 2 counties away from the NC border, but on the extreme western side, like 3 hours from Highlands. I actually grew up in Brevard!

Jen, you'll have to wait a while. I don't think E nor I can stomach any more funnel cake for a while...

Your funnel cake so reminded me of the french quarter in New Orleans. Num...num!!! No maggot gagging there!

I can't believe you're having snow there! Holy Cow!

...and I actually can't remember if I've ever had funnel cake. I think I might have, once, at an amusement park.

"What the Cuss" is awesome and i think i may start saying it around these here parts.

Also i swear by the first 6 or so steps of the snowflake method. Those steps never steer me wrong

I've pants, snowflaked and storyboarded. I'm combining them to create one uber method.

and yes, I love funnel cake!! Plain, with no fruit. I just love the dough and sugar. mmmmmmmmmmmmmmmm, that's the taste of summer!