Garden Updates! (and something else...)

Since it's Thursday, and I let Thursday be my cheating day, I thought I'd share some recent pictures of the garden, since it's been a while.

Sadly, we lost both the squash and zucchini to squash-borers. We were quite upset.
Tomato hornworms got ahold of the cherry tomato plant, but we spotted and removed them before they could completely kill it.

The weather has been wonky this summer; all of June was rainy, it seems like, and for the last 3-4 weeks, it's been dry as a bone. Blossom end-rot has not been our friend.

Now that pretty much everything has come and gone, Evan and I have made some plans as far as how we want to rearrange the beds this fall. And even though it goes against all the gardening rules, we bought some more plants last Sunday (the 4th) and put them in. 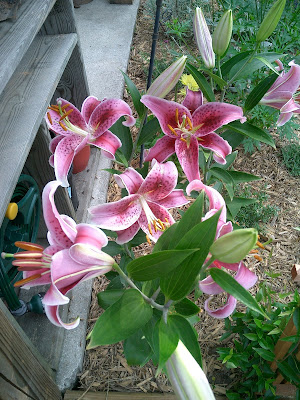 Stargazer lilies. They smelled so good...but only lasted for about a week. 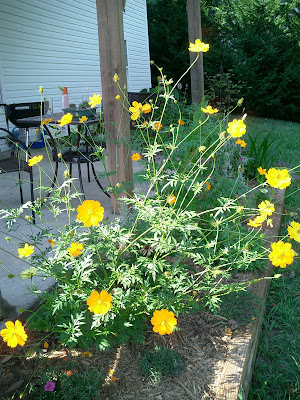 Cosmos! They're so happy looking. Really glad these seeds panned out--they were the only ones! 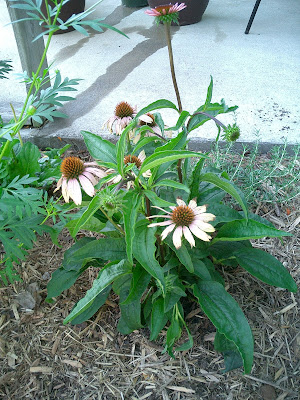 Took out one of the lychnis and put in this cone flower instead. 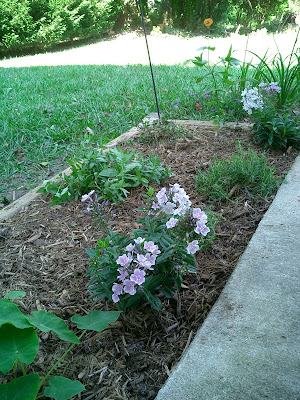 The part-sun bed, or as I like to think of it, the Frankenstein bed. This poor thing's been though all kinds of work. Right now, we're letting the elephant ears take over the far left side. The gardenia is nice and revived, we moved to the meadow sage to the center, and planted garden phlox on each end (the pink flowers). Some mounding perennials in the middle (sandwort). Once fall comes, we'll dig up the dwarf calla lilies and put them over here. 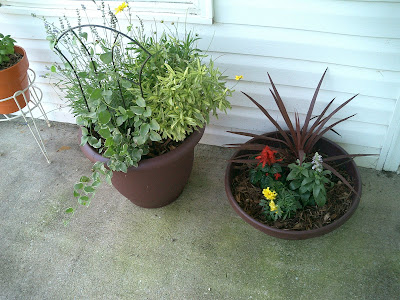 Display by the door. 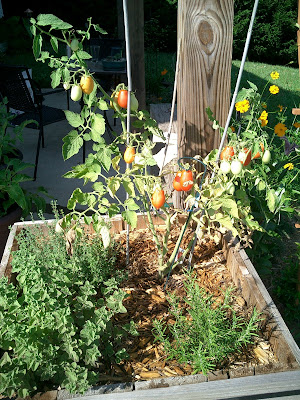 It was really bright when I took this, but the roma tomato plant is finally perking back up a bit. It's producing fairly well, and the fruit tastes great. 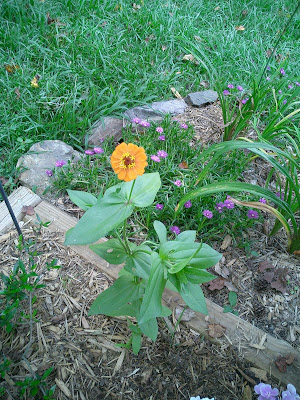 These are the zinnias that I won in Lola's wolfpack contest! They were an extra prize. :-) 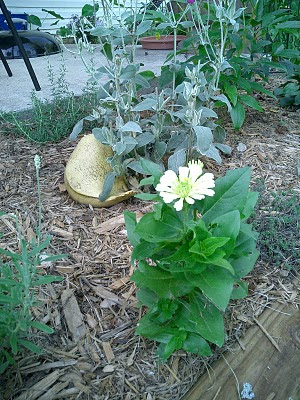 This one is even prettier now--these pictures are from the 4th. Two blossoms, and they're fully opened.
The third set of seeds that I planted got a nasty bug attack, but they're actually recovering from it quite nicely and should be blooming soon.
Well, now that you've looked at my pretty garden, I guess I can tell you the other thing:
I finished my novel!
details tomorrow
Posted by Summer Frey at 12:41 PM

Gorgeous pics! this weather has been insane!!! ;o)

Congratulations on finishing that book. You did it, Summer! I also loved the beautiful garden shots. I'm a flower person, too.

Beautiful pictures! And congrats on finishing your book, woo!! :D

WOO-HOO!! *does the Hammer dance back and forth and spins*

Gorgeous flowers. I LOVE your garden. It looks so peaceful :) And CONGRATS (again) my dear! SO, so awesome!

You finished your novel!!! That's the best blossom of all. Congratulations!

I admire people who like to garden and congratulations. That's always a great feeling.

ahahaha! I love how you sneak in the big news at the end.
GO YOU!

And how coincidental - i took pics of our gardens today for an update post coming up. We had bend rot last year on our tomatoes but it cleared up.
i hope we don't get squash borers.
Also, we have some sort of blight on our lillies but haven't been able to hit a garden center yet to ask about it

I am beyond proud of you, and you should be proud of yourself. Finishing a novel is HUGE. So many SAY they're gonna do it, and never start...or start and never finish (the first draft). You have done what many dream of, but never accomplish. :)

Now you get to slog through Revision Hell with me! ;)
Yay! Lola loves company.

Still in Maine. I miss you guys. I think I have the husband convinced to leave here early and head home this weekend...Sunday, I guess.

So tentatively, if all goes according to my evil plan, I should be home and back in action (writing, reading, crittering, emailing, etc.) as of this Monday.

Again, congrats!
I think I need to send you a prize. :)
Love,
Lola

The garden is looking awesome! More power to you for having the patience to tend to it too.

Also - Congrats on finishing the novel! Do you do the thing where you stick it in a drawer and don't look at it for months so when you come back to it you're seeing it with fresh eyes?

I'm really sorry about your zucchini and squash plants - but your roma tomatoes look good and so do your flowers!!

That's the thing with gardens, you win some, lose some! Then you try again later and hope for the best!

You finished your novel!! Congrats!

DUDE! CONGRATS ON FINISHING YOUR NOVEL!

Also, you won. :p I'm stalled on The Goddess of Vengeance at the very end. So if there was a prize for being the first summer novelist to finish, you get it! :)

Also, your garden is gorgeous.

So who makes up the gardening rules? You plant what you want, Summer!

I love looking at other people's gardens because I haven't the time or knack for my own right now. Great pics. And congrats on finishing the novel! (also is this a new background? Or have I just not been here for a while? Or am I just completely unobservant? I likes it!)

Tee hee - I was looking at the lovely pictures and forming comments such as "beautiful lillies!" and "Yay for Frankenstein bed!" in my head, when I finally got to the message at the bottom and went "squeeeeeeeeee!". Congratulations! I am so happy for you! Well done! :)

Tee hee - I was looking at the lovely pictures and forming comments such as "beautiful lillies!" and "Yay for Frankenstein bed!" in my head, when I finally got to the message at the bottom and went "squeeeeeeeeee!". Congratulations! I am so happy for you! Well done! :)

Gorgeous pictures of the garden. And of course, congrats on the novel. :)