These Are My Things.

Yesterday, I finished making my writing gloves. I've been on a major crocheting kick lately; in the past two weeks I've made four pairs of gloves and a scarf. I'm planning on starting my first hat, but it looks pretty hard.

Here are my gloves. They're different from my outside gloves because they are more delicate and of thinner yarn.
Again, the camera blows and wanted to focus on the keyboard instead of my hand, but whatev. You get the picture (get it?) 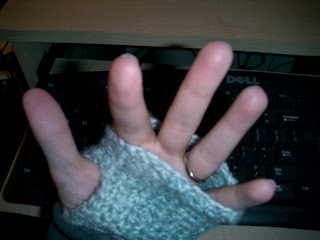 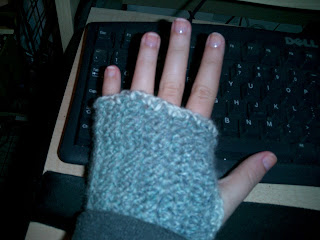 Yay warm hands. My thermostat claims it's 70, but I'm pretty sure it's lying. I've been wearing jeans, a long-sleeved shirt, hoodie, hiking socks, my boot slippers, these gloves, and a frickin hat ALL day. And I'm still a bit chilly.

Next, because this is my blog and I do what I want, I'm going to show you pictures of things that I like. 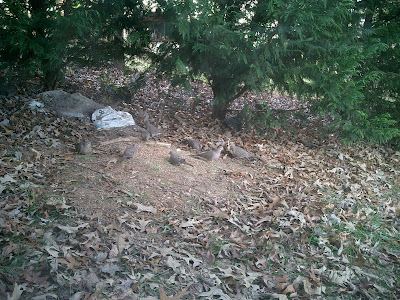 Just a sampling of the bird action that's been going on outside my office window the past week. Click to enlarge, so you can actually distinguish the doves from the ground. I've had to refill that feeder three times in the past week and a half. Birds are eating me out of house and home! 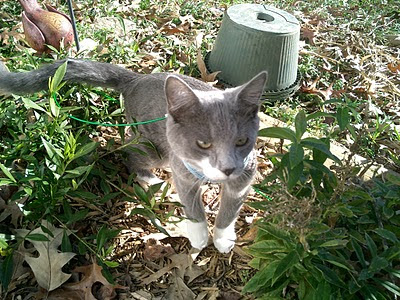 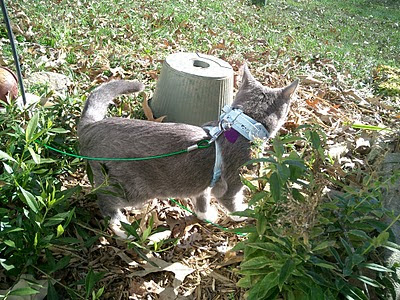 This is Mack. He's been whining about being an outside cat for so long now that I bought him a harness and tie-out line. If the weather's good enough, I'll tie him to the front patio for a little while. He mostly just sits in the garden and stares at birds--as if he'd know what to do with them.


Last weekend, Evan and I painted our kitchen table and chairs. They were a gift from his aunt and uncle and rather beat-up, so we decided to give it some personality. Mack approved. 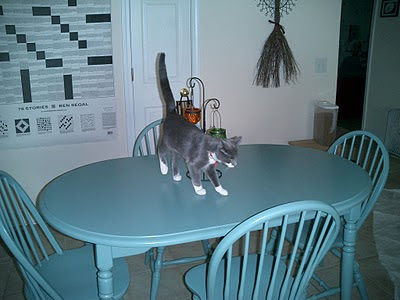 And now for a few more pictures of my cats, because they're my fur-babies. 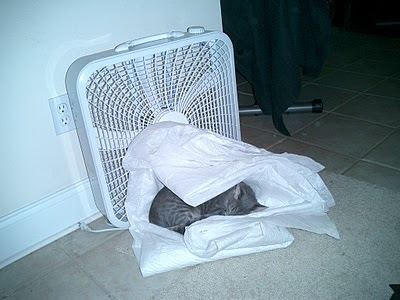 Magoo, the female, decided the drop cloth from the table project was a prime napping spot. I'm showing this because it's cute and also so you won't think I don't love my Goodle-Boodle as much as Mack. I do--he's just the showboat. As evidenced by these next two pictures...

Lately Mack's been acting really restless. He walks around meowing and is trying his damndest to climb to the ceiling, I'm pretty sure. These are the two places we caught him this week: 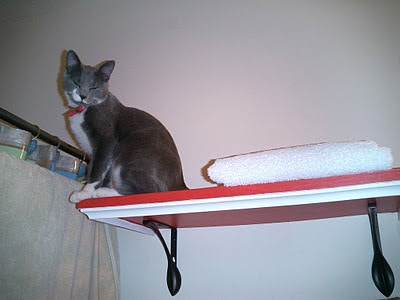 Top towel rack in the bathroom. He got up there by jumping from the sink to the top of the shower curtain, and then walked over onto the rack. 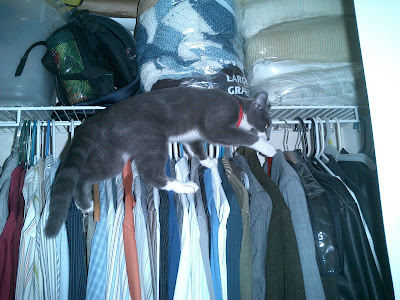 Having a little stroll across Evan's dress shirts. We still don't know what that was all about.


So there's my things.

How's your things?
Posted by Summer Frey at 4:05 PM

Those gloves = WANT! I'd persist in asking for a pair were it not for me being too far away to persuade you properly with incessant pokes :P

We got 1/2" of ice this morning and I've been shoveling and salting all day, whew!

Love the cat pics and I actually saw the doves without enlarging :)
Jules @ Trying To Get Over The Rainbow

I'm sure Evan was thrilled with the cat climbing on his clothes.
You're cold? You must be skinny. Skinny women are always cold.

Love the writing gloves and the kitty pics.

Cats crack me up. Yours are so adventuresome. Love that!

Still want to get together. Just gotta get my duckies well and back in a line, first. I'll be in touch!

Aww, love your kitty pictures. My daughter & son-in-law are coming tomorrow, and bringing their two cats, so I imagine I'll have some good "thing" pictures soon. :)

I love those gloves - well done you - I am most impressed!! Yay!! And great that you're feeding the birdies! awww I'm a bit worried with mine - I refilled my bird feeder but a few days later and it's still full.. I hope the birdies are ok!

Awww but look at adorable Mack and Magoo!! Awwwww they are so lovely and adventurous - especially Mack! What an athlete!!!

Thanks for sharing these pics!! Take care
x

I'm impressed that you know how to crochet, what an awesome job you did!

I want to get some bird houses and a feeder so my kitties can watch them.

LOVE the pics of your fur babies, btw. Roo is our photo-hog/clown. Kitty Boss is the affectionate recluse.

I'm trying to figure out how he got on the shelf and the rack....he really is an LOLCAT!!!!

You know, if the writing thing doesn't work out you can always supplement some income by selling those gloves to other cold writers. LOL

Mack reminds me an awful lot of my Phoebe (in regards to the things she gets into). Now I know why I wind up with cat hair all over the shirts in my closets!

I want to steal that cat...he's so beautiful!

Loving the gloves by the way. Just bought some similar to those for NYC holiday in Jan.

Looks like Mack's wanting to climb a tree, what with his escapades in the top of the closet and wanting to be outside.

I think you should auction off another pair of gloves by the sound of everyone's comments. Also, if you wear feety pjs and a snuggie you don't get as cold. ;)

I wish I wasn't allergic to cats! Yours look like so much fun!! *green with envy*

First...LOVE those gloves! Covet, want, need...*BEGGING* *batting eyelashes*
(those look like they match your hat...do they? The one with the snow w/ E?) (also, your french mani turned out really well :)

Dude, Mack is rad, all Xtreme sports and stuff.

I like your sweet girl all curled up in the tarp. :)

Love your glovelets. I spin yarn (in addition to spinning yarns!) and I can usually spin just enough to get a pair of mitts or a hat before my attention span is depleted. cool!

oh god, i can't look at those kitty pictures - i want a cat so bad!
Yay on the gloves! And i've heard hats are really easy so i'm sure you'll be fine!

Your cats are adorable. I think that you should have a contest and give away a pair of those typing gloves. My hands have no circulation. Can't keep heat in my fingers. So they are frozen when I am typing. I need something like those. Awesome work!!:)

Those gloves are so cool! I'll have to learn how to do that :) And your cats, as always, are adorable! Have fun keeping up with them!

We keep our thermostat on 67 during the day and let drop down to 60 when we're in bed. You would definitely need your gloves in my house!! :)

Those are great gloves!

He's so cute walking across the hangers like that!

Aw, cute cats! That's so funny you tie him out- I've never heard of that! So cute! I love your gloves- I have a couple fingerless gloves that I LOVE (I'm not as talented as you, so I bought mine ;p)

Kitties are adorable!!! I'm thankful to live in Houston where ice and snow is not a regular occurence, but I must say it's hard to not want to see snowfall when you've grown up with it.

Just a reminder! Be Jolly By Golly Blog fest is this Monday! Melissa and I look forward to reading your entry!

Jen/Jules
Unedited & Jules and the Stars

Oh, I love those gloves! I'm desperate for a pair - it's FREEZING in London these days!

I have gloves like those! My roommate in college made them for me. They're the best! And I wear them ALL the time because it's so cold!