Has it really already been a week?
Google Desktop doesn't lie (or does it?).


I'm reaching that stage where I'm a bit terrified about where I'm going. I know from experience that it's pretty well downhill from 50k--thank goodness. However, the more I write, the more things are deviating from my [extremely loose] outline/plot guide. I'm already seeing the need for tons of scenes to be added earlier in the draft, freaking out about the heavy lean towards romance [though it's not a bad thing], and generally wondering how the hell I can communicate without their #$*@ eyes.


Tonight will be Sigo's last night with Evan and me. We're going to Nashville this weekend, so we'll be taking Sigo to her new home a little earlier than expected.


She had a fairly stressful weekend visiting the in-laws and their cats. 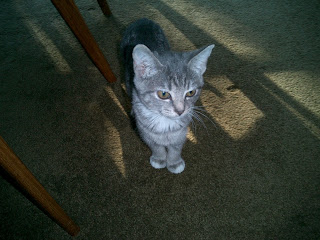 Lots of toys lying about, though. 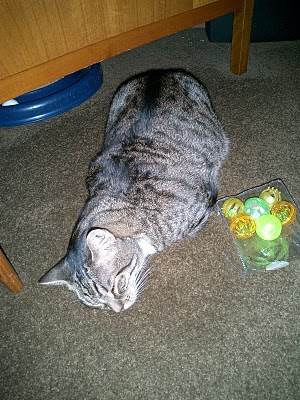 Herbie just wanted to be friends, but he's a big boy & a wee bit intimidating (even though his legs are three inches long and he's declawed...)
----
I"m reading my first Jodi Picoult book, Nineteen Minutes. I'll withhold judgment until I'm finished.
In the meantime, I'm curious about your genres.
What genre do you write?
Sometimes Blogger seems inundated with YA authors--not that there's anything wrong with that. Just wondering where some of the other genres are!
Posted by Summer Frey at 7:30 AM

Wait. Communicating depends on eyes? I thought it was eyebrows!

I write poetry about anything and everything,
I do so love your cat, I used to have one many years ago , she was diabetic and I sued to inject her twice daily. She passed away 10 years ago just 2 years after my husband, I found her a great comfort, it seemed she knew what was going on.

Congrats on your word count. Sadly, I'm no where near that. I know what I want to write and where the story is going but stupid stupid computer is giving me grief. Oh, and I write romance. But you knew that already.

I am at 49,885 words in my first ever woman's fiction novel. If I sign off of blogger and get cracking, maybe today I can catch up to you! Best wishes!

I am currently working on a horror novel. My next project I would catergorize as paranormal suspense. And then I have an urban fantasy and magical realism book in the works. I also just got an idea for a thriller.

So predominantly, I'm under the "fantasy" umbrella. Horror is mostly a genre onto itself but there are a ton of "dark fantasy" books that I would consider or can be considered horror. But then again, a lot of people don't understand what horror is.

Although, my short stories range from suspense to horror to psychological fiction (in which my characters are insane and homicidal or suicidal).

I don't think I could write literary or commercial fiction. I read some but I mostly enjoy when something otherworldly and violent happens.

There is romance in every story so I wouldn't worry about your romantic entanglements. :)

Let me know how you like Nineteen Minutes. It's sitting on my shelf at home...TBR.

Well, I WAS a literary fiction writer, until, er, I got bit in the ass by an Urban Fantasy novel. Now I'm a UF writer. I don't think it's YA, though. Does crucifying someone in the first chapter disqualify it as YA?

Woo! ADULT fantasy horror and sci-fi checking in!
Tho i am planning a YA fantasy for NaNo. Still i don't see my future in YA.

I had a dream last night they we went to cat store (where they sell cats of course. different breeds in boxes) and got a cat. And now i want one. sadface.

:-) Glad to hear you are making progress!!! Romance is definitely not a bad thing and good luck speaking with your characters' eyes! I love that - what a challenge. Of course you'll meet it and then some!

Aww big hugs to Sigo - I hope she's now de-stressing and enjoying her toys!! I'm so glad she's going to her forever home soon! Thank you for rescuing her.

Genres? Oh I would love to write lit fiction but know my limitations!! I'm currently working on supernatural thing! LOL!

I write fantasy. Sometimes YA and sometimes adult, it depends on my muse. Sorry the kitty had a rough weekend :-)

I'm not sure about my genre yet. My first book was a memoir, second women's fiction and so is my third. So yeah I guess that's it, but I'm still not satisfied with that description. I need to settle and not stutter when someone asks me what's my genre.

YAY for the progress!!! You'r doing great and I know you'll continue to do great!!

Bye Sigo! You'll be missed!!! Such a cutie! Minus the meowing of course...

You know what kind of writer I am :)

Congrats on the progress! I write YA paranormal romance/urban fantasy. I may try my hand at an adult novel some day, but for now this is where I am.

Congrats on moving forward. I'ma firm believer that if you just keep hammering away, step by step, you'll get there in the end.

I'm chick lit! Hurrah for romance and the like!

Awesome progress! I'm 10k-delete 5k-delete 3k-delete do this fourteen times and then 2k into my next novel and hope I don't delete it tomorrow morning.

I'm a literary fiction kind of guy, but recently was inspired with an idea for YA. (Inspiration happened after I started blogging and I don't think there is any real correlation there.)

I also was recently struck with the idea for a humor book, but the "idea" is rather loose and we'll have to see what comes of that. It will be in the same vein as my Ducks Out Of A Row blog... if I pursue it.

The short stories I have in various stages of development are literary fiction, too.

Congrats on the word count. I'm a literary fic/women's fic/sometimes maybe a genre type thing writer. I'm not sure what to classify the current WIP. I'm gonna ask my crit group. :)

I'm sorta working on a factual based sci-fi fantasy...? I read Nineteen Minutes...whoa! It was good, provocative, and kept me thinking and analyzing...have fun in Nashville!